The Evaluation of Spinoza’s Hermeneutic Theory

2 Associate Professor of the Philosophy of Religion, Faculty of Theology and Islamic Studies, University of Tehran, Tehran, Iran

The need to offer a hermeneutic theory about the interpretation of the sacred scriptures is of great importance. In response to the inappropriate interpretations of the Bible, Baruch Spinoza, the Jewish theologian and philosopher, tried to give in a hermeneutic theory. In this article, first his hermeneutic theory is explained based on the role of the four main components of author, interpreter, text, and method and with reference to the works of Spinoza. Then, pointing out the difficulties of Spinoza’s theory from his own viewpoint, his theory is compared to the traditional, modern, and postmodern approaches of hermeneutics. In this evaluation, although Spinoza’s hermeneutic theory is classified as a traditional hermeneutic theory, it is shown that he has moved away from the traditional readings before him and has paved the way for the modern hermeneutic to some extent. Spinoza’s attention to the effect of the interpreter’s awareness of the context, beliefs, and the viewpoints of the authors of the Bible in the process of interpretation is among the positive points of his theory. However, some components of his theory such as the attribution of non-realism to the Biblical text, the recommendation to remove the viewpoints and beliefs of the interpreter, the sufficiency of understanding the Bible based on its epistemic principle, and the ignorance of many Biblical teachings cannot be defended. 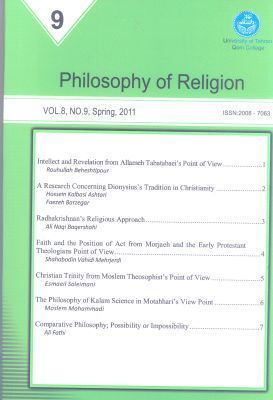